I came to work to find a GIANT bouquet of flowers on my desk AND in my boss’ office a giant gift bag crammed full of candy!! It was Administrative Professionals Day!! (aka secretary’s day…except I’m not a secretary…secretaries do not sit in 2 hour meetings trying to get the ACTUAL GODDAMNED NUMBERS FOR THE GODDAMNED $16 MILLION CONSTRUCTION PROJECTS. oh, yeah, and a secretary does not make excel play bitch for her…’who’s gonna map utility usage in the dorms for the last five years?? oh you are! yes you are because you are my bitch and I want a pivot table!!’ My job…kinda sexy). I thanked my boss profusely, then I told him to please thank his lovely wife as it was she who remembered and she who purchased all the gifts. She’s pretty good about these things.
THEN I emailed all the other admin assistants and told them to bring their bosses by so that the bosses could feel the shame of not being as awesome as my boss.
THEN I calculated the difference between our previous contract with the electric company and our current contract. Seems we’re not getting the deal we were promised. I called a maintenance supply company and told them to stop faxing to my goddamned phone! and then I sent contracts to the landscaping people and the real estate consultants. Sexy? YEAH!
THEN Anna showed up and we went to Wench where we discussed her sister, how to make seitan, the awesomeness of the dog park, the creepy people of the world and then I think I told her I was going to stick her in a shiny little box and carry her over my head while singing to her. She did not appreciate that. But then I told her about the time that I realized my bread machine looked like rocketmoonship and I put that on my head and ran around pretending to be a rocket. She appreciated that quite a bit more.
THEN back at work I explained to my boss that I had wanted Thursday off so I could do shiny sunshine things but it was going to be rainy and I had to be at work on Friday because it’s the only day my assistant can be in for the pay period and she can’t be there if I am not there so could I take the rest of the day off? YES! So I popped a giant orange gumball and left and drove home listening to Neal Conan be terse with callers that don’t get to the point.
THEN I bit the underside of my tongue (don’t ask)
THEN I took the dogs to the dog park! I like going to the dog park during the day, it’s quieter, more relaxing. There aren’t as many dogs, but there are some and the dogs had fun. And I stood in the sun for an hour.
Then I worked on a lace design (yay)
THEN David brought veggie burgers and beer and we sat out on the front steps and watched the sun set with the dogs and the beer.
NOW we are watching a movie and I am going to work on my project for the Pants Charity Bonanza!

I forgot my camera last night. I wanted to get pictures of the dogs romping at the dog park. Is there a happier place on earth? If there is, I don’t want to know about it, I don’t think my mind could handle it.
Chester’s becoming snappy with bigger dogs. In many ways this is fine dog to dog language, but no one is really comfortable with a dog snapping at their dog, especially a little dog with such fucking huge canine teeth. They’re like sabers in his mouth or something. I think the saddest thing was the black and white spaniel retriever type dog that was excited by it! He kept bugging Chester until Chester would snap at him and then run trying to get Chester to chase him. Chester hated this. Ironically, this is EXACTLY what Chester does to Maddie, bug the shit out of her until she decides to chase him and kick his ass.
Man, I need a day off, something in the middle of a week would be nice, get stuff done outside, take the dogs around the lake while it’s not busy, just be outside with spring.
Speaking of…the migrating loons have stopped off at Lake Hiawatha. I look at them every morning on the way to work and I want to stop to tell them I will see them later in the summer when we head up to the BWCA again. Chester loves the BWCA! 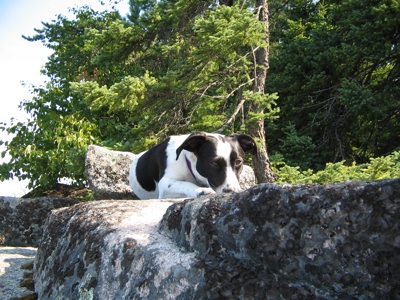 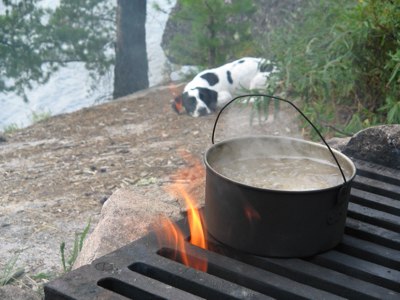 Craftstravaganza this weekend, be there or be found in cheap clothing and accessories made by Chinese orphans!!!