Once again, even though we thought we sealed the tank up pretty well, Chicken the Gecko has gone missing.
I have more faith in his ability to survive this time. Last time I figured he died right away and weeks later I discovered I was wrong. This time I am pretty sure he can make in on the spiders and whatnot.
I will try to get pictures of the other lizards as they have grown a lot, but they aren’t so keen on being held or photgraphed anymore so it’s difficult. maybe I will get some sleeping shots at night.

David was walking by the buffet and just as he set the bag of peanuts down he spied a scrawny little Chicken! Of course he was gone in a flash, geckos are fast that way.
David managed to catch him and we got him back in the aquarium (with better sealed openings so as to not lose the Chicken again). We fed him little crickets and mealworms so he can bulk up again.
As we were setting up Chicken’s space Stinkwingo managed to escape, but anoles are not nearly as wily or quick as geckos. David found him pretty quickly and everyone was soundly put to bed.
Welcome back, Chicken. I missed you.

Part f me has always wanted a hobby farm. A little place with a couple of ducks, a few chickens and some goats for milk and cheese. More of a hobby than a farm.
We’re starting small. First it was the 2 dogs, then it was the lizards. With the lizards we can’t just buy a bag of Anole Chow or Purina One Mealworm and Rice Formula, they need (prefer) live food. Initially we were buying crickets, but they need more variety so we got some silkworms to supplement. The thing about live food is that it is alive and it does alive things like eat, grow and shit. The eating and shitting are fine, they balance, but the growing is problematic when the silkworms grow faster than the lizards can eat them. Within 2 weeks the silkworms were too big for the lizards which are growing but are still pretty small.
And the crickets are problematic as well. They don’t grow so fast but they cost money. Nine cents a cricket doesn’t seem like much, but with 3 lizards it starts to add up, plus there are the trips to the pet store to restock the cricket supply.
So what to do? Start breedin’!
The crickets were easy enough. We went to the pet store, bought a bunch of adult crickets and set them up in an ice cream bucket with a special egg laying container with special egg laying medium (dirt with burlap over it) and left them to do the wild thing in relative comfort. 10 days later we are rewarded with teeny tiny baby crickets. Soon they will be big enough to feed to the lizards.
The silkworms are way way more fascinating. The thing is, we ordered 200 silkworm eggs but they sent us well over 300. After they surpassed feeding size we weren’t sure what to do. We started picking out the silkworms that got bigger much faster than the other and putting them in a seperate box. After a bit we had about 30 silkworms in the Fat Monkey box. The other ones were deemed too slow to grow and were offered up to the birds as a tasty treat (I had a moment where I felt guilty about feeding the silkworms to the birds then I realized we bought them with the purpose of feeding them to lizards and this was different but equal). We’d have kept all the silkworms but silkworms are VORACIOUS eaters and shitters and they only eat mulberry leaves or specially formulated Silkworm Chow (no lie, that’s what it is called) and it’s pricey and we didn’t want to spend the money on it.
So we kept feeding the fatties and one by one, they started cocooning in the shoe box. Once they emerge they cannot fly or eat, they just fuck, lay eggs and die (I know people like this!!!). The eggs can be refrigerated and doled out judiciously to hatch as needed.
We’re like little bug farmers, breeding our own little bugs. I’m very excited about this. Pictures soon.

Chicken has flown the coop.
My little gecko finally found a way to sneak out and start a new life somewhere else. Geckos are sneaky little bastards and the very small openings (the kind you wouldn’t take note of) were just large enough for him.
Perhaps he’s off fighting lizard related crime
maybe he’s growing fat and tyrannical on the excess spiders
or he’s decomposing in a pile of ghengis turn in the front yard.
goodbye, Chicken! I wish you luck in whatever adventures your lizardy life brings you (until you freeze to death this winter) 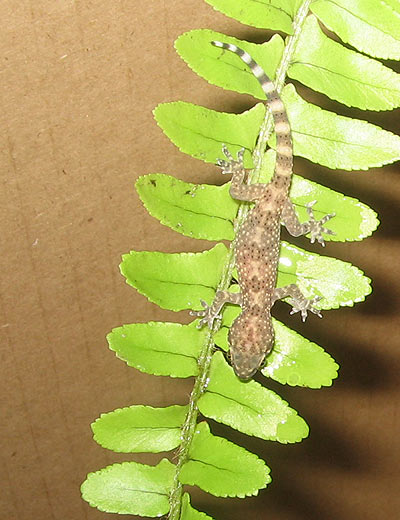