What’s with all the anger at Martha? I, too, can do a great many things
that Martha Stewart can do, but not all as well or as elegantly as she can.
As for your comment about MArtha going to jail—WHAT’S IT TO YOU!!! Stop
acting like some holier than thou snob! Besides if she’d been a man she
would have been rewarded for refusing to give up her info. Lets face facts
they only went after MArtha because she refused to bend over and take it up
the ass which is what most Republicans expect us all to do. I bet you’re a
George Bush fan as well!! Well, now there’s an true idiot for you!! The
only thing I figure is that you can’t do much of anything right and are
jealous of Martha Stewart. What’s wrong can’t get a cookie to turn out
right!! By the way I bake my own bread, paint my own artwork, do my own
crafts, sew, crochet, etc, etc, etc and have even raised 7 children What
are YOUR accomplishments honey; I don’t recall reading your last book or
watching YOUR television show. Get the point!!!!!!

I got this response today from a very old post I made, back when I made my first batch of jam. In only a single sentence I make a very tongue in cheek joke about Martha Stewart.
Obviously this person did not bother to read any of the rest of the site. If she had read more she’d know that I adore Martha for all her good ideas and deep seated nuttiness, I don’t idolize her or anything, that’s unhealthy. She might know about the various crafts and projects I undertake. She might have even gotten an idea of where my politics lie.
And so I am left to wonder, does this person surf the net daily to find mentions of Martha and defend her? Or was this just some sort of cosmic joke? Either way, I felt that a comment this important should not be lost to the ether….attached to a post 15 months old. 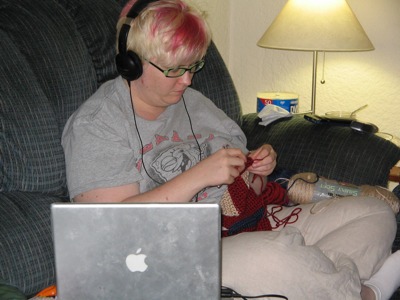 This is me in an über-slouch, crocheting a scarf, surfing the web and listening to NPR podcasts.
I’m amazed I get laid at all.
Edited to add: You will also notice that I am wearing a Spongebob shirt. What you might not be able to see if that the shirt says “Nebraska Cornhuskers” on it. I think David bought it at a Stuckeys in Tennessee or Mississippi.

At work, sitting at my desk thinking about ugly people dorm utility usage when i notice little bumps on my left hand. And they were on my right hand. And they were n my arms….and they kinda itched.
So I scratched because I love me a good scratchin’. and they itched more and I scratched more and my knees and hips were itchy and my shins and I kept scratching and itching and i looked like one of those people that smell like a garage and sit too close to you in the waiting area of city hall (all you want to do is deal with your ticket and get it over with). Ha, I was totally the crazy one.
This morning I was in the shower and my soap was gone so I used David’s. David’s soap is blue and has some sort of man scented manliness to it. I believe this is the “Power Sport Mountain Goat” scent, I’m not sure. It smells nice on him, though. I smelled all manly this morning.
Then I got little bumps that itched and I scraaatched those bumps. Dang. It seems that this soap is not just manly in name but also deed. It did not appreciate being molested by my boobs! It was offended by my lack of man-wiener. It wanted revenge.
It got revenge.
Now, take a minute and really think about every nook and cranny (heh heh cranny) that you wash with soap when you shower. All of them, right? If you don’t say ‘right’ I’m not going to sit by you anymore. all of those places itched.
This was worse than the time we switched detergents and I woke up in the middle of the night all allergic to my underpants.

Last night was knit crochet night at Borealis Yarn Shop in St Paul! It was my first night hanging out there. We discussed babies, trading dogs for whiskey, trading babies for whiskey, cervix poking and the ease of locking a dog in a box so you could go to work as opposed to having to pay for daycare.
Then it was opined that perhaps you COULD do that with a kid, but the consequences might be a little more severe than a hyperactive dog.
So, I guess trade the baby for whiskey before you have to choose between buying whiskey or paying for daycare! Easy!
Speaking of trading kids for whiskey, has there been any actual proof of kids drinking bleach on that reality show? I’ve seen speculation and hearsay and ‘it’s been reported that’ but no actual real evidence. And, frankly, with the hyperactive media shoving one sensation down our throats after another, I usually choose to reserve judgment on these things. Their retractions tend to be small and unnoticed. I don’t watch TV and I haven’t seen this show so I don’t know how harsh it is. I have a hard time believing any kid was ever really in danger. Network weasels lawyers generally don’t sign off on things like “kid might get bit by the rattlesnakes we lure into her cabin”. They’re kinda jumpy about that stuff, even if the parents did sign a contract that might have said “we will not hold cbs responsible for taking a rattlesnake, opening its mouth and pushing its fangs directly into the skin of my child”. Weird how the law works, contracts of consent do not absolve an entity from responsibility in the face of willful neglect.
The more I read about it the more I think, “hmmm I could get $25,000 to send the kid to ‘summer’ camp for three months. during this time he will be away from his shitty friends, all the cultural influence like MTV and beer commercials. I get some quiet. He might grow up a little, learn to work and maybe be responsible. Oh, better take out that life insurance policy on him before he goes. you know, just in case.”
I don’t have kids, though, I have dogs, and I don’t have to really worry about their friends since they can’t work a doorknob and can’t leave the house without me!
The day Chester comes home with a bag of catnip that ‘isn’t his’ I’m sending him to Dog Nation.

I have small small feet, probably disproportionately small. Also I am fat.
Over the years I have developed small painful growths on the 5th metatarsi of both feet. Basically, where the phalanges of the baby toes meet the matatarsal bones.
Earlier this summer it came time to replace my sneakers. They were worn out and the EVA midsole was all smooshed and not so bouncy. I purchased the same exact sneakers that I had. Over the course of the summer those bumps ached every time I walked. The pressure was getting to be so much that I dreaded walking the dogs and would often whine to get out of it. I considered seeing an orthopedist, but I just couldn’t bring myself to do it. Sometimes you just don’t have the strength to hear another person say, “well, you wouldn’t have this problem if you just made smarter choices, took better care of yourself, stopped being so impulsive with food, exercised more, ate less.” So I stuck it out, figured this was my punishment for years of bad choices and being fat. I’d never had this problem before but i’ve put on a bit of weight lately and I’m getting old.
David is more persistent than I am, also he cares and worries about me. He started investigating. He found that my new sneakers, though the same brand and style, were constructed ever so slightly differently in that particular area. The toe box support on the sides was just a fraction higher. Maybe just a couple millimeters. Such an insignificant thing. Such a tiny sliver of difference. Vasque probably did it in to provide more support in the area. That little sliver of support was not allowing my foot to break in the shoes. One little tiny area was redesigned to push inward and my foot needed it to push outward. I put my old sneakers back on and wore them all weekend.
Bliss. I could walk without pain again. I am not filled with the overwhelming urge to rip my shoes off and cry! And this is where we accept that David is far more logical than I could ever be. I’m too emotional. I’m too quick to blame myself. I’m to quick to say “live with the consequences”.
I’m pretty lucky to have David! Sadly, however, it looks like I will be trading in my much beloved Vasques for a new sneaker. Sigh.