This is my latest project, Lopsided Bunny! He’s my first stuffed animal. 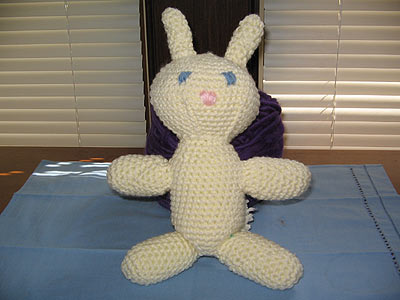 See how cute he is! 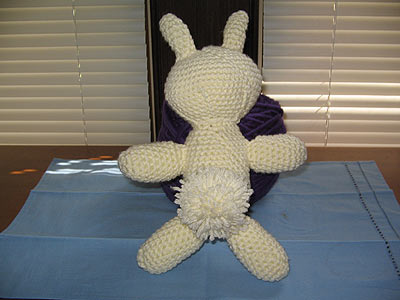 He even has a puff tail 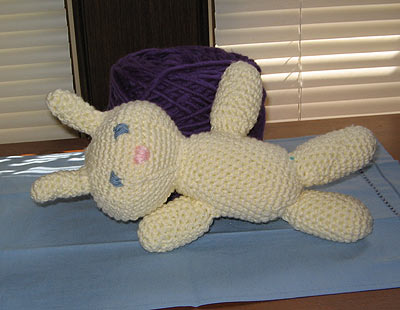 A great big special thanks to Crochet Me for the pattern and instruction. Next up, I’ll be making teddy bears, little girls with purple hats and maybe hippos.
Soon I will post pics of the new bags I made as well. The messenger bag turned out better than I would have expected.

I just woke up from 2 seperate dreams in which I was a prodigious serial killer. I was like a super serial killer. Both dreams, however, mostly took place after I was caught, in the first dream I killed 2 people, later, when I was caught, I found out I had actually killed 127 people! WOW!!!
In the second dream I was living in a special house with 2 cops. They were supposed to keep me from killing again since I actually had no recollection of killing anyone. I found out in the dream that I had killed over 800 people! What the hell. This is why I love dream logic. In the real world it’s physically impossible to be a serial killer and kill over 800 people. There’s a threshold, a limit, once you hit a certain number you change from ‘serial killer’ to ‘fascist dictator with weird mustache’. Also, in real life, if you manage to kill over 800 people on 800 seperate occasions (we’re not talking about firebombing a night club here) and don’t remember any of them, they don’t just set you up in a happy little house with a maid and a puppy and 2 gruff but concerned cops! They kill your ass in some spectacular way.
In my dreams I am everything I cannot be in real life. In my dreams I am prodigious and successful and hardworking.