If you’re going to outsource your tech support help to India you might want to contract to a company that bans it’s employees from using the word ‘Kindly’. Seriously, it’s the HUGEST tipoff that you’re a cheap-ass company that outsources your tech support to India. Also, it would be nice to get something other than the same exact answer 8 times from 2 different tech guys. Yes, I’m aware that you have the correct services installed on the server, what I’m asking you goes beyond that.
As you can see, the mighty changes here at velvet-c are not going as well as planned and if I had not recently paid for an entire year of hosting I’d consider moving to a different host, not because I am unhappy with the host or its services (though I am unhappy with ‘jared’ and ‘blake’ and their boilerplate tech support style), but moatly because what I want to do works better on any other server but microsoft.
I’ve got nothing specifically against microsoft as a whole. I prefer macs over pc’s but 80% of that is aesthetics. This here website uses microsoft servers and asp and happily thrives. Unfortunately it is also stunted.
There is much more that I want to do with my site including categorize the posts and make a daily photoblog (I have to do something with the 4100 pictures sitting in iPhoto and I am sure I have mentioned my rabid dislike of Flickr somewhere on here). My skills are limited, there’s really only so much I can do. Me ex built this site for me (I made the first, very ugly, very awkward iteration of this site. It lasted about 2 days) she did it before applications like MovableType and WordPress were available.
Now, instead of beating myself up trying to figure out how to add the functions that I want I am going to TRY to migrate over to something that has everything I want and more. There’s no sense in reinventing the wheel and no one has ever accused me of being an overachiever.
The problem is that I can’t get it to install. At the point where I need to log in to get the ball rolling, I get an error. Every bit of research that Alex and I did today turns up the sorts of answers, IIS has issues, fix IIS.
Since this isn’t my server, I must go to tech support and they tell me they have all the modules installed correctly and I tell them I’m very happy and very aware that the modules and whatnot are installed correctly but could they please just answer the actual question I am asking.
Damn, I just went off on ‘Jared’ and asked if he was in India and if he was then perhaps I should wait until Monday when I could talk to someone who actually worked with the servers.
Whatever. I just contacted MovableType’s tech support to see if they had any suggestions. I’m moving out of that realm of pirated software and lack of tech support and into that all too grown up world of paying for things and getting services in return (I even buy music off iTunes! Go me!).
In other news…
had a cubano sandwich today from Manny’s Tortas. It was wonderful, totally brought back memories of trips to Florida. Not quite as good as the ones I’ve gotten down there (one from St Petersburg was particularly nice), but still very good.
Finally did some grocery shopping. We hadn’t done any real stock the pantry type grocery shopping in about 5 weeks or more. it was time.
Also, weird stuff keeps showing up in my comments, for the life of me I can’t figure out why it’s happening. Generally, I just ignore it, it doesn’t affect the way anything works, occasionally they get in my way and I have to make them disappear. Not quite comment spam, but close.
And here are some state fair photos. It’s not all of them but it’s more than none. 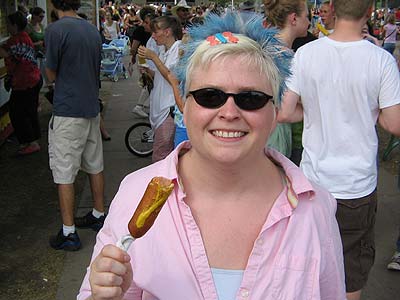 Me eating a pronto pup. 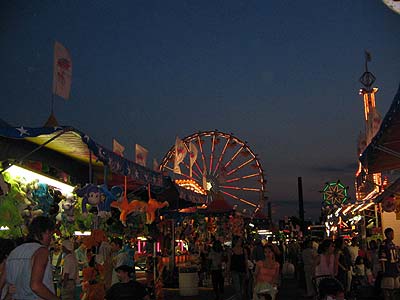 The Mighty Midway
There’s more, someday you’ll see the 9 pound sugar beet or the smothered fries or the Magnum PI ride…
Breakfast at Maria’s Colombian Cafe tomorrow morning!
UPDATE:Tech support just sent me a link to a microsoft knowledge base article about my problem. This would seem to be the answer to my issue except the solution offered up to me by microsoft was to contact my server administrator. I emailed ‘Jared’ back and asked asked who my server administrator would be…