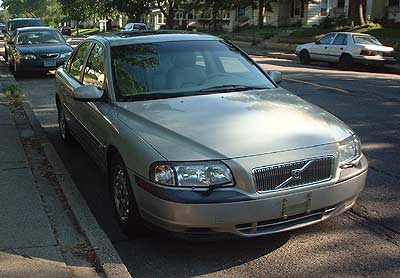 I did it. I did it all by myself. I did the research, I looked here and there, I decided what I wanted and I did it.
I drove it off the lot today at 4:30. I got a good deal, my payments are almost half of the Saab’s. The suspension and the turbo were both dead in the Saab, I didn’t want to put the money into fixing it when it had over 95,000 miles.
It might not have been my first choice, but it was definitely a high choice.
Woo.
Beebo update…
On the night of my birthday party Beebo went into his chrysalis. He glued some leaves together at the edges with caterpillar boogers. We let it sit and we worried. Eventually the leaf packet was crispy and somewhat hollow. Fearing he had died we opened up the leafy envelope. Inside we found a beautiful shiny black chrysalis. And that’s it. We’ve left that alone and hoped for the best. Hopefully he’ll survive and become something wonderful.
And that’s all we can really hope for anything.