Okay, so I’m resolving to stop bitching about people so much. Call it my zen live-and-let-live moment or something. I can’t quite descibe it, but I’m having this revelation of “just because someone is doing something I don’t like it doesn’t mean they are wrong, just that it’s not what I would do”. I suspect it won’t last long, mocking other people is the cheap bastion of the uninspired and let me tell you, I am no great light in the sky.
This means 2 things
1) the fucktard in the rusty Chey Cavalier who cut me off tonight gets a pass
2) I will regale you with yet another post about my dogs because my dogs are by far the happiest beings on the planet. Way happier than any person I know.
Okay so.
Every night I walk my dogs. I generally wait until late, usually around midnight. This is partly because I live in a pretty dog intensive neighborhood and my dogs are pretty damned excited by dogs (Ghengis in a happy way, Maddie in a protective way) and partly because I love the late night peace of my neighborhood. On the return trip we walk up the alley behind my house. About halfway up the alley I let Ghengis off his leash. It’s very late at night, there’s never really anyone around and he does not run away.
He doesn’t run away but he takes off like a springloaded rabbit hellbent on dominating the carrot kingdom. He flies up the alley to my driveway, up the driveway around the house, into the alley, back to me. He makes a wide circle behind me and does the whole circuit over and over again until I reach the driveway. Just this little dog beating every ounce of muscle into the pavement, running so hard and fast you are sure he could rocket to the moon.
When Maddie and I reach the driveway he races around the house until I reach the front door, the I hold the screen open and he runs in without even being called. Sometimes I’ll chase him around the back yard or play tag with him, sometimes I just pretend I am going to grab him, I lunge and growl as he passes me.
There are those who say that dogs do not feel any but the basest emotions, that it’s not in their brains or something. They say dogs can’t smile or express joy. I defy you to prove to me that Ghengis is not smiling, that he is not laughing silently as he runs and turns and leaps around. Every night I let the little brown dog off his leash because there is nothing that makes him happier than running and in turn there is nothing that makes me happier than seeing him get to do that.
The pleasure is entirely simple and satisfying.

Proof positive that I am in the running for worst dog owner ever. Today we stuck Ghengis in a 55 gallon aquarium. 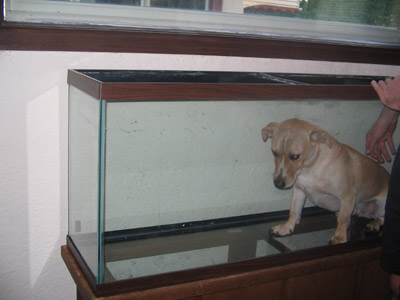 Now we have to vacuum all his hair out of there so we can move the lizards into their new home.
I have much cleaning and packing to do. I’m going up to the Soudan mine and neutron collector this weekend! Party on, science nerds!