I put the little guy in the car with a blanket and turned the heaters on in the seat. We got to the vet and he very subduedly (is this a word) tried to play with the other dogs and cats.
The vet loves loves loves ghengis, she’s the vet that he’s seen mostly since I got him. She always gets so excited when she sees him.
She checked his ear and cleaned it out for me. I clean his ear with the liquid, but I rreally need to be getting in there with a q-tip once a week but I’m so scared that I’ll hurt his ears. We’re just going to have to practice.
My vet gave me a big thing of ear medicine, way more than he needs. This way, when he gets another infection I can just treat him at home and not pay another office visit. I’d probably go in anyway, I feel better knowing that he’s being looked at by a professional. Still, it’s nice to not have to buy the ear goo every time.
So yeah, I guess little little ear tubes means I’m going to have to be more vigilant, even if I am super squeamish. I don’t want to hurt my little guy.
Okay party peeps, I’m off to Ramadan dinner with Jessi and her husband. yay Egyptian food!!!

Ghengis was scratching his ear more than usual again. I say ‘more than usual’ because ever since the day I brought him home he has scratched at his left ear and shook his head a lot. I even have video of the day I brought him home and he’s shaking and scratching. Most of the time he vet can find nothing wrong, every once in a while, it turns into an ear infection.
The vet and I don’t really know what to make of his ear. There’s no hearing loss, no mites, and no signs of allergy.
I was concerned about his ear last night, figured I’d call the vet and make an appointment for this evening or tomorrow. This morning, when I sat down to check my email and drink some tea Ghengis came to curl up next to me. This is not unusual, this is our morning ritual, cuddling for 30 minutes in the morning quiet. What was unusual was how desperate he was to cuddle, he kept shifting and repositioning.
I looked down at him and he gave me the saddest face, his lower jaw was quivering. Dogs can’t cry the way little kids can, but they can come close. So, the first day of my boss’ vacation and I have to call in late to work to take my dog to the vet. I’m totally getting a note from the vet just to prove I was not just taking the morning off.
sigh, poor little puppy. 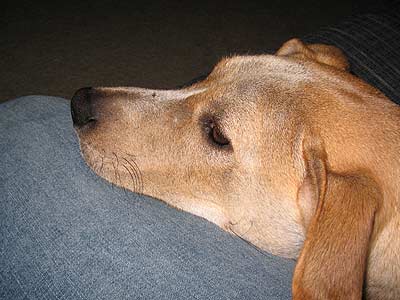 it’s not the jumping, the barking, the happy dances or hyperventilating joy, those things are nice from the dogs when I return from a trip, but they aren’t what really make me happy. What I love is the exhausted dog pile, the happy, contented, tired dogs that pile onto me and fall asleep.
The goat farm was a wonderful weekend. We had so much fun. I’ll post pictures and stories later. Now is time to chill and watch movies and drink jamaica Tang.

Happy (early) anniversary to David.
Friday is our 1 year anniversary and while I’d prefer to write about it on the day of, we will be going to a goat farm to celebrate and I won’t have internet access.
So, a year ago I’m emailing this guy and we decide to meet. I call him from my office to try to set things up. I end up on the phone with him for like 90 minutes. Then I get home, get ready and call him for directions. I end up on the phone with him for so long that I have to tell him that if he doesn’t let me off the phone I’ll never get there.
I pick him up and we go to the Chatterbox Cafe. He’s very tall and thin, he has a nice smile, laughs at my jokes, makes me laugh. So far so good.
I order my dinner and when it arrives it is full of onions and olives, two things I hate. After eating around them and picking them out, he graciously offers to trade meals with me. Nice. I forgot he was vegetarian, my meal has chicken, he’s eating it anyway.
Hmmm, so he’s really nice. Now I am worried, maybe he’s too nice for me, maybe he’ll get to know me and dislike how un-nice I am.
We go to coffee and sit there yammering on about this and that. He tells me about eating the sand on the beach in Kenya and canoeing in the bayou in Louisiana. I’m sure I tell him retarded stories.
I’m a little nervous, I’m smoking like a chimney.
I drive him back to his place and we end up sitting there talking again. Strangely, at this point I am still unsure about the progress of the date. We’re having good conversation but does he like me? I don’t know. Do I like him? I’m not sure yet.
I’m not even thinking seriously about anything, I’m nt looking for serious, I’m looking for something casual, a fling before I sell my house and head off to the east coast and reinvent my life.
So I’m not sure how the date is progressing, then we kiss.
And now he’s here and I didn’t move and he’s good and kind to me and my dogs and he makes me giggle and smile and laugh.
So I guess that date a year ago went pretty well.
I like you, David.

I hit a dip in the road of my mind early in October, it was a hard time all around. To know me is to know that I have a low level anxiety that loops around in my head sort of constantly. On occasion the anxiety kicks itself up and I find myself wading around in a soup of unpleasantness.
I spent most of this month worrying about everything, was I fucking up my life somehow? was I making poor decisions? was I wasting some unseen opportunity? I don’t know! I mean look at most of the people that you know who are fucking things up, it’s not like they can see what’s happening! How would I know, I’m in the middle of whatever I’m fucking up, I can’t see from the outside.
Things were not so good, but as these things go, they got better. I analyzed the hell out of it and got a grip on myself. Am I fucking things up? I don;t know but I guess it depends on your definition of ‘fuck up’. I have a good job, I have my own place, I pay my bills as soon as they arrive (except my insurance, I threw that in my purse and totally forgot about it!) because I can, I have a good relationship with someone who is kind and intelligent and fun, I have my dogs and they seem generally content with the situation.
There are things I could be doing, I suppose if I put forth the effort I could be president of the moon someday, but I don’t want to be. I prefer a quieter life and I have that.
And, so while you really should not trust the self-assessments issued forth by the crazy people, I think I can safely say I am doing okay.
And I’ve become more productive! I’m cooking dinners more often, cleaning things up, keeping track of stuff better. Sure, we still have ‘chips and salsa’ nights (how could you not when you have a stocked supply of Herdez Salsa Verde straight from Mexico? I’m trying to be judicious in my eating of the Salsa Verde, but it’s hard!), but I’m really trying to put a meal in front of David on more nights than I am not.
It’s important to me. It is my way of saying he is worth the effort. And he seems to appreciate the effort. It works out.
Speaking of…
Last night I peeled and shredded 2 small potatoes, drained and rinsed 1 can of chick peas which I then ground in the food processor. Combined potaotes and chick peas and 1 egg and a little olive oil and lots of spices (cinnamon, cardamom, ginger, chili powder, red pepper, salt, pepper, cumin, cardamom). Shaped them into patties anf fried them up. Served them with an onion, apple, raisin, carrot, cinnamon, orange chutney/relish that I invented on the spot.
I thought it was pretty good, but it definitely could have used more flavor. I was worried about overseasoning and it ended up on the bland side. next time, garlic and lemon and oregano will be added to the patties (which were a lot like soft falafel) and the sauce will be closer to a puttanesca (sans the olives, I hate olives).
My audiobooks idea has been going swimmingly! Keeps me productive! I went to go by another as I am almost done with ‘The Year of Magical Thinking’. The iTunes interface kind of sucks, I really dont like it. I end up having to go to Amazon.com and looking up things I am interested in and then going back to iTunes to look for it. I got the bright idea to get “Quicksilver”, Neal Stephenson’s first book in the Baroque cycle. Now I like Stephenson, I think he writes good stuff. I also think he writes too fucking much in his stuff. Brevity and getting to the point are concepts lost on him. I figured I could get the audiobook and get through the daunting Quicksilver faster. First off, it was $47, I’m not spending $47 on an audiobook that I will likely only listen to once. And why would I only listen to it once? Well, because it’s 22 goddammed hours long!
I’m pretty sure I don;t even have 22 hours left in this life! I downloaded “Anansi Boys” by Neil Gaiman and should be starting that tonight.
Speaking of…
I’ve got dishes to do so I can make us some dinner. Can you put molé on salmon? I’m gonna find out (david will get tofu. We know you can stick mole on tofu).
So long, party people.