Today I read and article about a pit bull and then read the readers’ letters, and oh isn’t that a fun peek into societal views! Many of the same tired old arguments about ‘inherently aggressive’ pit bulls were trotted out and paraded around. In the spirit of aggressive ass dogs, I just wanted to share this again… 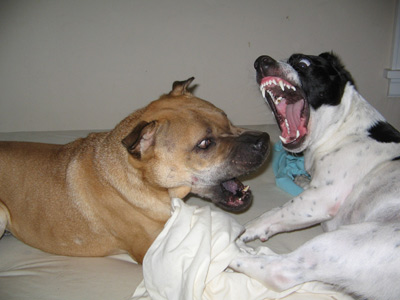 Have a lovely weekend!

…except, you know, with actual effort!
I have been spending my spare time researching the ‘war on drugs’, the rise in paramilitary style raids by local law enforcement agencies, the prison industrial complex as a lobbying machine the perpetuates the war on drugs in order to perpetuate itself (it also lobbies hard for mandatory sentencing laws and ‘3 strikes’ type laws), the huge glob of money wasted on this ‘war on drugs’, the lack of effect it’s had on real hard criminals, the deep and everlasting damage it has done to small time users who have broken no laws except the drug laws, the lies put forth about the effects of drugs, the cynicism felt by a generation of kids raised knowing the adults were lying about the effects, Nancy Reagan, the incentives small local police forces gain by perpetuating this mythic war
and so on and so on.
Seriously, it’s like I’m in high school or college but I’m actually putting all this effort into this and this is not for a graded paper! No! It’s just something that has been bothering me and I wanted to write about it here. Yeah, a blog post slathered all over with my opinions about the war on drugs.
The problem is that I don’t have the time or energy to write it all up. I will soon, but not right now. Suffice to say, whatever the goal was in the beginning, presumably to keep the citizens safe, healthy and prosperous, we’ve lost sight of it. When the police forces stop focusing on “to serve and protect” and start worrying about filling quotas and getting funding grants for paramilitary equipment they don’t actually need, we’re lost.
Yeah, I got opinions! Great big lathery (yes, lathery, not leathery) opinions and I’m gonna share them with you just as soon as I am not trying to figure out my Minnesota State Tax ID# (so I can collect sales tax on the things I sell at festivals) and creating a Limited Liability Corporation so that I can protect my personal lack of assets from attacks on Bubbo Designs (and vice versa, wouldn’t want someone coming after me and walking away with a pile of orange roving and a needle felter!). Now I have to order 16 pounds of roving and some jade green dye!
Go small businesses!