When you have children you take lots of pictures of them, ostensibly to preserve the precious memories. This is a lie, not a total lie, but close. You try to get in there a few good incriminating pictures. You know the ones, they’re all sweet, in the bathtub with a cowboy hat on, or shoving a pen up their nose or something along those lines.
You take these pictures because you know that in 10 or 12 good years the rebellion and betrayal kicks in. The fighting back, the bad attitude, the slamming of doors. As a parent you bide your time because you know that a couple years after the rebellion kicks in, so kicks in the dating phase. You get to meet the prospective girlfriend or boyfriend and suddenly, you have all the power you lost when the great hormone imbalance of the western hemispere kicked in. You can pull out those pictures and show them to the date.
Nice
Problem for me is, you’re not my kid and you’re not going to date (sorry about lobbing off your balls like, but you have to admit, the complete lack of humping is nice…right?).
You’re in your teen months now and rather obnoxious. Since you won’t be bringing a sweet little girl puppy home for me to meet, i thought I’d make your humilitation public as revenge for…
* destroying my sunglasses
* devouring countless rolls of toilet paper in the hallway
* chewing my underwear
* eviscerating a pillow on my bed as I slept (just how the hell did you do that??)
* chewing the tongue out of my favorite boots
* chewing my favorite sneakers
* chewing up my security blanket
* not only destroying every toy i’ve bought you but doing it in such a way that the entire floor gets covered in the excelsior
* pulling up the carpet
* eating out of the cat box
* causing a bruise the size of Kansas on my upper are. Twice. (same exact scenario both times)
* peeing on my comforter
* eating a dead bird you found in the yard and then immediately drinking out of my glass
* devouring my socks
* crawling into my lap for a hug and immediately farting (i really hate this one)
* methodically picking the fur off your stuffed animals and leaving it everywhere
* dog breath
So, here you go. Your dignity for the world to see… 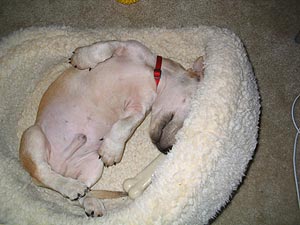 I’m particularly fond of this one of you peeing. I think it captures the humiliation I’m going for.
Okay, that felt better
xoh

The ‘this and this and completely unrelated that’ is becoming a bad habit of mine. Sorry.
Quote of the …day/week…whatever
“In the college of sex, foreplay is NOT an elective”
The QOTD ties into a conversation I was having with a friend about sex. Or more specifically, I want to write a sex column. Not a sex advice column, though I’d be pretty damned good at that, just a regular pithy bit about sex. When I tell people this they bring up Sex in the City, but I’ve only ever seen 2 episodes of that (in one they had to rent a car to go to a baby shower. Being from the midwest where you MUST own a car or die I was only bemused). The real problem is that there’s no real way to do it without offending your friends, exes, currents, parents, priests, cashiers, neighbors, bosses, dentists, delivery men, sisters, produce handlers, princes, genies, candlemakers, accountants and astronauts. Sigh.
Relatedly, has anyone seen those charts where they compare your sexual adventurousness to different kinds of ice cream starting with vanilla for the boring, missionary crowd going up to rocky road for those that leave you wide eyed and speechless. If you have, let me know.
The dog has a new game, when I sit on the couch leaning way forward, he likes to drop small toys down the back of my pants and then go after them.
HAPPY FREAKIN BIRTHDAY MARK!!!!!
Your gift hit UPS today and should be speeding it’s way to you. HOORAY!
I’m obsessively watching Babylon 5 which I borrowed from Alan who needs to update more often. Seriously, what’s the point of me haranguing you to get a damned website if you aren’t gonna update.
Have you ever considered how many old men you know who actually ARE grandpa Simpson? Off the top of my head, I can name 2 that I know.
Yeah, okay so hooray or something, that’s what’s going on.

This morning’s freezing cold temps are just another reminder that I need to be the hell out of here. Somebody buy my damned house so i can move to warmer climes.
NTS…don’t forget your iPod in the car when the temps get so low. Makes the iPod angry and sluggish
On an unrelated note…
If you go to the store to buy a duvet cover and you find one in a subtle, tasteful striped pattern try to keep in mind that stripes on a king sized bed end up looking like an optical illusion on a space that big. Better to go with solid colors or bigger, more abstract designs.