1) coming home, feeling blue, finding you are out of ice cream bars. WTF? Where did they go? Obviously they went in my mouth since I’m the only one who eats them. Still, where the fuck are my ice cream bars???
2) those telephone menu systems that require you to speak your answer rather than push a button and I have particular ire for those that don’t let you stab zero repeatedly until you get an operator. So you sit there on the phone and you listen to a menu like this:
If you would like automotive sales…say ‘taco’…if you would like to know the weather…say ‘genocide’…if you can stick your entire fist in your mouth…say ‘humble’…if there is a penguin in your line of site…say ‘blastocyst’…
and so you say ‘blastocyst’ and the inhumanly calm voice says, “you have selected…’baklava’ if this is correct say ‘yes’ if this is incorrect say ‘no'”. And so you say, “no! for the everloving peace of god, NO!!” and the voice comes back and says, “I am unable to handle your request.”
I can not for the life of me see the use of this system. I mean it. You can’t convince me that this is a service provided for the rotary dial phone owners in the nation that must number in the tens. And companies that implement these systems are not brand new companies that have just put in brand new phone menu systems and made a poor choice. These are regular, established companies that decided to spend giant amounts of money to ‘upgrade’ their systems with speech-pattern recognition programs in the hopes of impressing me, the consumer. Do they expect me to be sitting there on the phone rambling seemingly unrelated words and thinking, “hey, i feel like a tube sock, but this company must be one worth doing business with because they’ve already made such massive amounts of money they can afford this fucked up phone system. No bother that I would prefer that they take that money and pass it on to me in the form of savings-rich coupons.”
3)My new mattress, with the featherbed on top of it is too thick for my sheets. I am not happy about this.
4)People who base their entire political opinion on campaign ads. “I saw an ad that said Politician X was dumb!!!”. Yeah, I saw an ad that said that I could make millions of dollars if I bought the package that would teach me how. Oddly, because it was an AD i assumed there might be an AGENDA behind it and MAYBE I should stop for a moment and consider the MOTIVATION behind the words I was reading. And on a related note, I hate when people are like “I heard Politician Y was trying to rehearse his answers for the debate and try to look slick.” Indeed, it must be a terrible place to live in knowing that people who speak in public might want to look as though they know what they are doing and what they are talking about. I can’t imagine a worse sin than being prepared. He added, “I heard he was practicing his answers to the questions even though he didn’t have the questions in advance.” Oh right, because in a presidential debate it is so outstandingly hard to predict what kinds of questions might be asked. Who knows, maybe some Wolf Blitzer clone might stand up and ask, “Politician X, with all of the dust on the moon, where do you stand on its distance from earth?”. Christ, if that was even a remote possibility I might watch, but really, all the same topics will be covered as in every election since the Greeks and the SAME answers will be laid out. Presidential debates aren’t staged so that we can see where the politicians stand on the issues, we already know the answers to the questions we already know will be asked. They have the debates so we can watch and feel like we are somehow part of the process. It’s times like these I am really glad I don’t have TV.
Okay, that’s enough. I’m going to meet Alan for a beer and a burger and some pms venting. We love Alan dearly because he let’s me vent my pms ire all over the table but refuses to allow me to take myself too seriously. He’s a good guy, that Alan, you should go read his blog and then tell him what a good guy he is.
Stay foamy, peeps.

He made it through his surgery just fine. He wants a root beer float and a gin and tonic, so he’s back to himself as well.
The most perplexing thing was that they took pictures with the teeny cameras inside him and printed them up, leaving them in his room. He, my sister and I just sat there looking at them like “is that a stomach? eeew what’s that??
Did they expect us to order up wallet sizes or maybe an 8×10 for the mantel? Looks like the family christmas card is taken care of.
In other news…I finally purchased my new mattress and in the process challenged 3 people to fight me. Also, when I went to set up delivery the woman said, “oooh is this your first big-girl bed??” um, I’m 31. Big-girl bed? Seriously? I guess it’s like being carded for cigarettes or something, you just pretend like it’s flattering and move on.
In case you didn’t know, this is my PSA to you all, old suburban women don’t like when you yell, “I’m fuckin’ hungry now, ya know” and then look at your sister and threaten to kick her ass if she can’t name the movie (Fargo). Follow it up with some choice quotes from The Breakfast Club and you’ve got a party.

My dad goes in on Monday for surgery. I know that things will turn out okay, but I’m terribly worried. Please send good wishes. 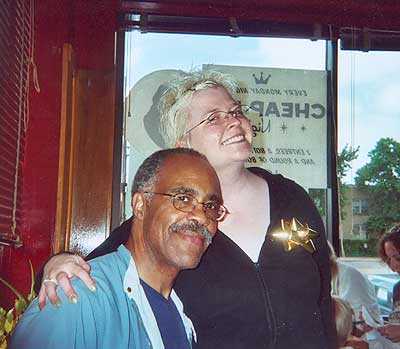 I am the queen of gravy making! I am king shit world heavyweight champion of gravies! No lie. You can say to me in your little whiny voice, “but my mom…” YOUR MOM LEARNED IT FROM ME!! and you can crawl around whimpering, “grandma…grandma…her gravy…so good..” and I’ll kick you in the ribs and make you apologize for your heresy once you’ve tried my gravy.
I am the interplanetary goddess of gravy and even Jesus himself could not tear the title from my grasp. Loaves and fishes indeed! Where’s the thick, unctuous sauce for your bread and fish??? It’s nowhere!!! I make the gravy around here and you better learn to like it.

Just another one of those random posts
I woke up this morning feeling like I had overindulged last night. I went over the checklist of things I had to do to make me feel better, shower, coffee, french toast. Then it occurs to me that not only did I not overindulge last night, I hadn’t even partaken AND I went to bed early. Dang. All the hangover, none of the fun.
Met Owen for brunch, french toast! We caught up on our lives and mocked the horrendous toupé and ate our french toast. Good times.
Luckily, Owen was there when I went to start my car and discovered the dead battery. Dang again. He gave me a jump (with me being all ‘don’t blow my car up!!’) and I got my car over to the garage. New battery, oil change, lotsa car love.
Jen and I took the puppy to the lake and let him run around a bit. Happy puppy running in the sun, rolling in the grass, chewing on his meaty, chewy treat. Unfortunately, the grass was just wet enough that when he rolled in it he managed to get grass stains all over himself. He needs a bath now. Lucky guy.
When we put the house on the market we packed a lot of stuff thinking we’d be moving soon. We were wrong, I need my crock pot. I dug it out and now I have a lovely pot roast chugging away in the kitchen. mmm hot roast beef sandwiches.
I had a dream last night that a friend of mine and I were back in high school. We had decided to play hooky and go back to his place. He picked me up and on the way to his house he made me stop at the school and pick up my homework. Before we had any illicit school-skipping fun he insisted that we do our homework first and he was going to have to help me. I love when my dreams take my real life and make things obvious. He’s totally my smart, responsible friend.
The weird thing is that it was the first “i’m back in school” dream where I didn’t get lost in the building trying to find my locker.
This morning I almost skinned the puppy alive when I walked out of the shower and found he had chewed the shit out of my security blanket (yes, I have a security blanket, shut up or I’ll kick your ass. Hard). I didn’t kill him, but I made him stay away from me. He managed to keep a five foot distance from me at all times and whined pitifully the whole time. It’s so hard to stay mad at him.
I borrowed the Babylon 5 dvd’s from Alan. I’ve been watching obsessively. Season one was not so good, but it’s getting better. My question is, why are all space seeresses bald?
Roast is cooking. Yum.