Off to the vet again today. I’m pretty sure that my dogs are funding the college education of at least one of the vets’ kids and possibly some of the children of the veterinary pharmaceutical industry as well. Dammit.
First off, Chester got his free initial puppy exam. He’s healthy and happy and it’s been determined that he is 6 months old and not 4 months. He has all his adult teeth and that’s the determiner apparently. He was well behaved and not too freaked out.
Maddie was back in for her feet. They’ve ruled out a systemic yeast infection and mites, so we’re back to allergy/immune system/bacterial issues. So now we have her on cyclosporine, an immuno-suppressant that they give organ transplant recipients to help them avoid rejecting the new organ. Since allergic reactions are immune related we’re going to give this a shot. She’s also on 3 weeks worth of antibiotics to help with this latest round of infection.
I just worry about her so much. When he feet are healthy she’s much more active and responsive. That’s a given, really. If your feet looked like hers you wouldn’t want to do anything. I made a promise to Maddie when I got her that I would always take care of her, that she would never be neglected or hurt, that the rest of her life will be spent being loved and adored. It is very important to me that I keep that promise.
On the other hand, now that Chester’s settled in, she doesn’t get as much rest as she’d like. He’s an active puppy. Very active. I was worried that there was something wrong since he didn’t really DO anything the first weekend we got him, he was so damned lazy. Now he tears from one end of the house to the other and back again and Maddie is right on him ready to wrestle and scrabble with him. He’s probably still too bitey, and I’m training him not to bite me so hard, but Maddie’s going to have to deal with that herself. There are moments you can tell he’s bitten her too hard and she just wants to kick his ass but she refrains. I don’t know why she does, but there it is, some amazing self control.
The dogs are passed out after their afternoon vet ordeal. I’m going to go have some soup. 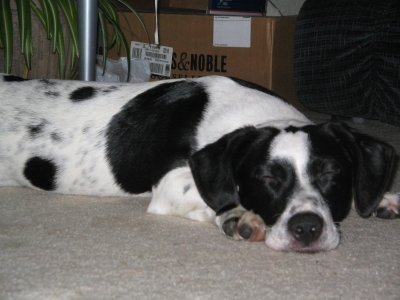