What the hell was I thinking? Tell me that? I start every day with a homemade latte consisting of 4 shots of espresso and an equal amount of soymilk. It seems like a lot and yet you don’t want to see me without it.
So today I had my coffee, then at lunch I had my green tea. This is normal for me. Then I went to meet Jen at the coffee shop and foolishly ordered a drink with 3 shots of espresso in it. What the hell!?! I am literally sitting here vibrating and my chest feels tight.
I need a highly trained monkey or something to sit on my shoulder at all times and remind me to stop making stupid decisions. This monkey should not shit on my shirt.

There is this giant ant outside, one of those “i’m a big ant on the prowl for a girl ant to start my own colony” kind of ants. You know, as opposed to the smaller “i’m a regular sized ant on the prowl for some food to feed my queen” kind of ant. this giant ant (just over an inch long) is crawling up my window in search of a lovely queen ant with which to get it on.
If i had a way to talk to him i would let him know that sex is almost never up. You almost always have to go down for the loving.
Also, I feel he should be warned that hanging out on the bird feeder is really only going to introduce him to a horny chickadee looking to score with a picky girl chickadee. 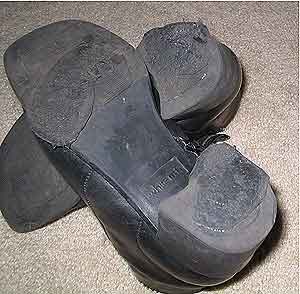 I went for my first motorcycle ride the other day. Yeah, I know, almost 30 and never on a motorcycle. It was great fun and I want to do it again, but next time I will remember that there are places your feet should not go, like on the exhaust.
No one told me this.
I really liked those boots.

There are no less than 6 lawnmowers running in my neighborhood at the moment. All day long there has been a constant ebb and flow of small engine chugging, the click of twigs in the blades, and the cryptic perfume of fresh grass and gasoline.

Last night at the drive-in (yeah, I know, the DRIVE-IN) they played the new Matrix movie and X-2. As a genre I’m not a huge action film fan, but for the drive-in (yeah, I know!!) I love the action films. Since they were playing both of these (along with Phone Booth, whatever) we figured it was a good date choice.
Okay, I know there are all these Matrix fans out there and lots of people care about the Matrix and there are even a few of you that think it’s real (if Señor Patrikios made a Venn diagram, he’d probably find some overlap between the Matrix believers and some lack of personal hygiene. This is just a hypothesis). I’m gonna go out on a limb and say it sucked. Completely and totally sucked. Certainly, if the genre were “movies acted out by wooden puppets reading from scripts written by monks for whom English is a second language and they had also taken a vow of silence so they don’t even know what conversational English would sound like” this thing would probably get an Academy Award.
Did it have some groundbreaking message? Remember that Sunday school teacher you had in 4th grade that was never quite right and she always smelled like Listerine? She could have taught you the importance of free-will and personal choice in less time and with more facial expressions (many would be classified as ‘tics’ or ‘wild grimaces’ but still worth looking at).
Hugo Weaving was pretty keen though, but that’s not surprising.
X-2 was really good, surprisingly good. The action sequences were engaging and tense, the characters more complex. Also, facial expressions were featured prominently.
I am so ready to be a professional movie reviewer.