Today is the 10 year anniversary of The Velvet Cerebellum. Ten entire years. Ten years ago I was in my office at MCAD and I made my first test post. It didn’t mean anything, just testing out the posting function by throwing out whatever was in my head at the moment (a habit that has stuck with me and served me well). Sadly, I don’t have a screenshot of the site from those early days. I wanted something bright and colorful, it was a monsterpiece of fuchsia and purple. Later we did a redesign and came up with a softer and more subtle color scheme. Sometime around ’05 or ’06 I switched from the custom ASP app that had been built for the site to Movable Type and with that came the pepto pink.
I like the pink. Sometimes I consider redesigning the site, but I do really like the pink.
Also, I am absolutely terrible at designing anything at all, so it’s best to stick with what is working.
Ten years, 1400+ posts. The thousandth post was made not long after the 5th anniversary. Not a terribly even distribution of posts, but my life…it’s not all that terribly evenly distributed. I always make a promise to myself that I will post more…and in my head there are a million posts bubbling at any given time, all the things I think about and want to vomit out into these little, neatly ordered boxes. I have opinions and I want to share them. Then I get distracted.
It’s funny to think about all that has changed in that time. The person who I was at 27 versus the person I am now at 37. Cats to dogs, girlfriend to boyfriend, relatively sane to…whatever it is that I am right now.
I’m going to do it again, make that promise. I’m going to promise to write more, because what this world needs is more digital blather and drivel, the world needs to know my opinions on health care and vodka and centipedes and shoes. The world needs more noise encompassing the signal.
The world needs me and my family. 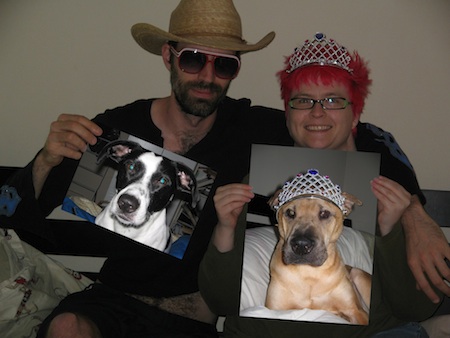