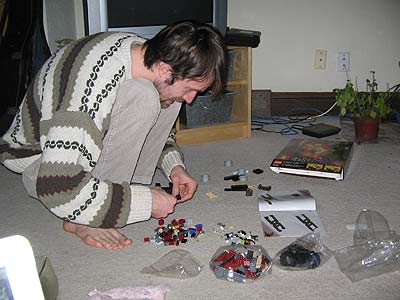 Last night was the maternal side of the family Christmas Dinner! I am officially exhausted.
* Cheese plate with Mirableu sheep’s milk blue from spain, Humboldt Fog chevre from California and an Irish cow’s milk cheddar. Whole grain and rosemary breads, olives, jams and truffles.
* Salad of mixed greens with roasted pears, roasted sweet potato, mirableu cheese, toasted walnuts and a spiced sherry vinaigrette.
* Bouillabaisse! I used the New York Times recipe, the recipe my mom uses. I followed it mostly, but was a tad heavy handed with the wine and used crab instead of lobster as I did not have the wherewithal to deal with a lobster. For David I made a tomato and bean soup with potatoes, carrots and kale.
* Dessert was a gingerbread trifle, the recipe was made up in my head the day before. Gingerbread drizzled with ginger syrup*, layered with chopped apple, pear, walnuts and dates (thanks to alex for suggesting the dates, they were a hit), the fruit had been mixed with some ginger syrup as well as fresh ginger, ground cardamom and allspice. Also in the layering was spiced (cardamom, nutmeg, allspice, cinnamon) whipped cream. The trifle seemed to be well liked.
My favorite gift of the evening was the definitive Dinosaur pop-up book!! OH MY GOD. This thing is just beautiful.
the flip side of everything is that I have 4.2 metric buttloads of dishes to wash. Sigh. I also have a healthy serving of bouillabaisse left over just for me!

*Ginger Syrup
Two thumbs worth of ginger, peeled and matchsticked
one cup sugar
one cup water
mix together, bring to boil. Simmer for 10 or 15 minutes, let cool. Strain. Also good mixed with vodka and lemon sour for a refreshing drink.