I think the laptop did completely and thoroughly die. This time, the hard drive should be fine, it’s just everything else that does not want to work.
I accept this (mostly). It’s almost 5 years old and in that time it has accumulated more abuse than a …oh I don’t know…Thai hooker? feedlot cow? unpopular opinion? So I’m not surprised it died, just really really pissed and mostly I am pissed because i have emotional issues and poor anger management skills…or something.
Anyway, pie.
also, i am trying to decide if it is awesome or retarded that i made a yarn color based on emperor penguins watching the aurora australis while protecting their eggs. awesomely retarded? retardedly awesome?
also, I am leaving for Missouri on Wednesday. This fills me with insanely unhealthy amounts of anxiety, but i will have my dogs with me so i guess it will be okay.
I wonder is you can make a legitimate sandwich with 2 slices of banana cream pie and a slice of blueberry pie?

Like you needed more proof of my insanity, but here it is….
Yesterday just before I sit down to spin up more yarn I pop a dvd into the machine. But it doesn’t recognize the dvd. poop. fine. I stick another one in and that one works fine, but I notice that my dvds are a mess and decide to clean them up. In the process I find 2 unlabeled dvds. Pop the first one in and it doesn’t recognize the format. Fine, put that to the side to toss. Put the second one in and it spins for a bit then my dvd player makes a weird beeeeeep sound, the display says “erase” and damn. ERASE??? erase what? why does my display say that? What the fuck?
Then it all dies. boom, dead, gone. Nothing. Won’t turn on, won’t eject the disk, won’t apologize to me. I dig out the instruction manual, the best it does is tell me to unplug it for 30 seconds. Okay, I know this routine. Plug it back in and still nothing. The manual says nothing about “erase” or anything like that. The manual assumes that the extent of any problem a user might have with their player is putting the disk in upside down or forgetting to plug the machine in.
I search all over the machine for the magic hole where you insert an unbent paper clip and the disk drawer is forced to open. no magic hole. I take matters into my own hands! I find a knitting needle, the ultimate tool of force and threat, and I push and cram and yell and finally force that fucking drawer open and take the disk out. But now it doesn’t want to close. So I yell AT IT! and then I force that fucker closed.
Still nothing. No amount of pleading or cajoling will help. The machine is dead.
but, it can be said that optimism and crazy are two sides of the same wooden nickel! I grab a dvd and I go to my laptop! The optical drive on my laptop died about a year ago, it just cannot recognize disks anymore. But I believe that if you let a drive sit and rest for a year, maybe it will magically recover…right?
I stick the disk in and no luck, it has no idea what it is and tries to spit it out. except it can’t spit it out because on one of the many occasions when my laptop hit the ground in an unexpected fit of gravity the case got bent right at the disk slot. When the disk is ejected it hits part of the slot and gets pulled back in. This causes an unending cycle of “hey, what’s this? oh it’s a disk! what kind? don’t know, better spit it out! hey, what’s this? oh it’s a disk! what kind? don’t know, better spit it out! hey, what’s this? oh it’s a disk! what kind? don’t know, better spit it out! hey, what’s this? oh it’s a disk! what kind? don’t know, better spit it out!”
So I grabbed a pliers and a spoon (they were within reach) and cranked the case a bit to allow the disk to come out. PowerBook cases are really soft and pliable.
At this point Ii lose it. Just fucking lose it. Everything in my head just breaks. I start sobbing uncontrollably, i can’t stop, I can’t breathe, everything is tears and snot and drool and I do the only rational thing, I call my sister.
Oh yes, my poor sister who is sick with some alien viral killbot and is hopped up on cold medicine gets a call from me all blubbery and incoherent and babbling on about everythng being broken! Poor girl. i owe her pie!
She calms me down, pointing out that sometimes $40 dvd players will die after 4 years of continual use in a house full of dogs and no vacuuming and all that. I get calmer, she makes me laugh, things are going to be okay. She’s good like that.
She’s even offered up one of her dvd players for me to use! see, awesome!
Now I must spin and spin and spin

let’s look at some photos, shall we… 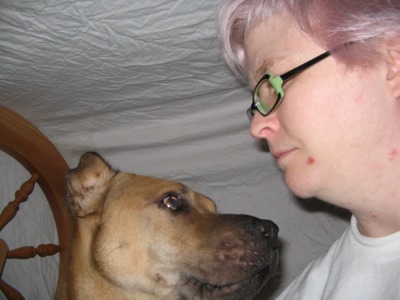 I made a fort in the living room last week. Maddie wanted to make sure everything was okay! Please note the absolute adoration in her eyes. She adores me despite the gigantic zit on my chin. 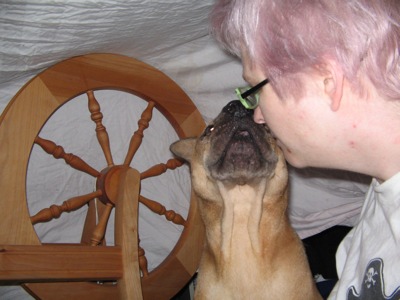 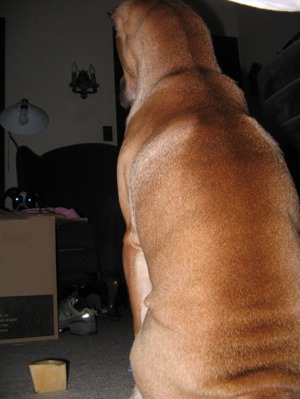 She goes on guard duty! 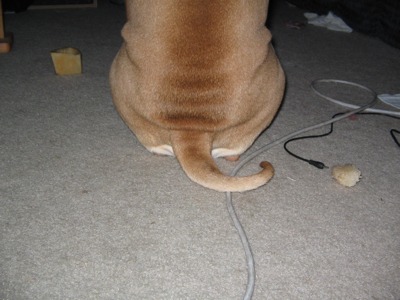 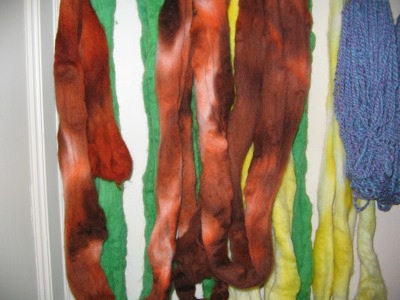 I kept trying and trying to find a way to dye my roving in this splotchy manner without having to lay it out and squirt the dye on it. I wanted a quick and easy way in the crock pot. Most of my attempts made solid color roving. Quite by accident I got this when I pulled the roving out of the crock pot this morning. Happy. 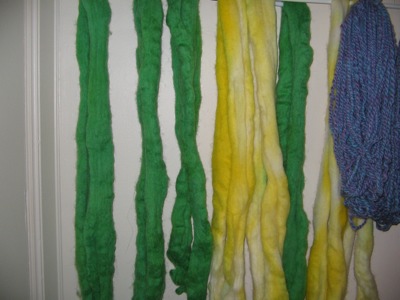 Yellow roving and green roving to be spun up and then plyed with white for my ‘Creamsicle’ collection (ha ha ha I decided to have a ‘collection’. awesome) 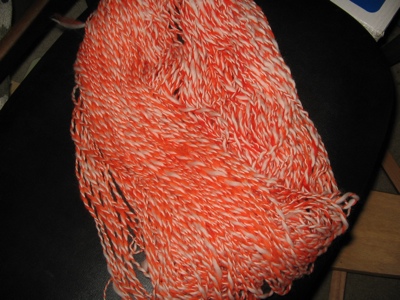 This is the first Creamsicle batch done up in orange 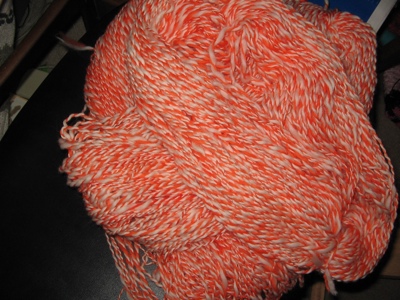 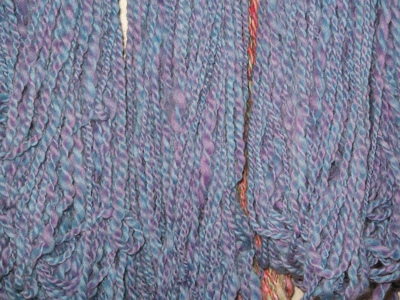 This is a blue and purple yarn I call HippoMoon 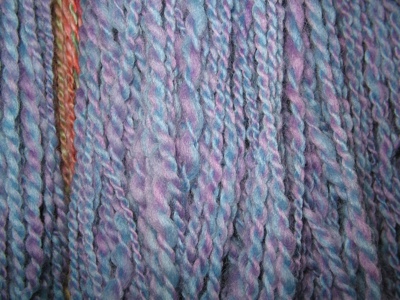 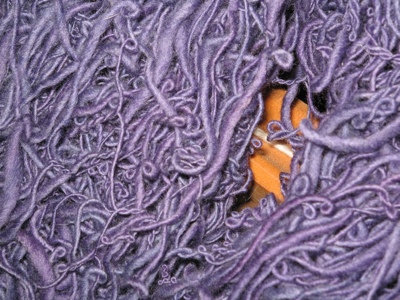 Noodly purple stuff that needs to be soaked and hung up. Still unsure about what I will do with it. 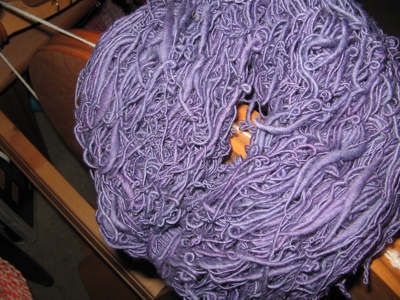 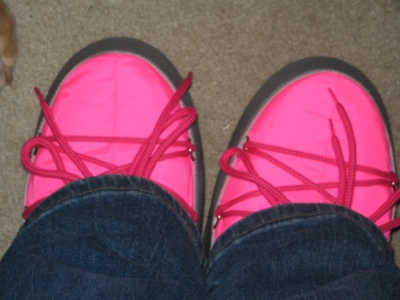 oh my god! I love my moon boots! 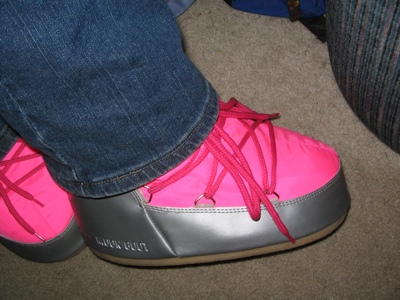 How could you not?? 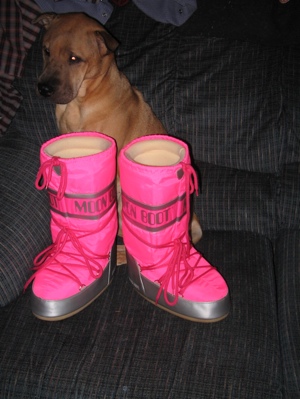 Even Maddie loves my Moon Boots!!!

Today, Maddie turns 8 years old. You wouldn’t know she was 8 when you hung out with her. She is bright and active and definitely outliving most shar pei expectations! Happy Birthday, Maddie! Eight years old is BIG GIRL TIMES! 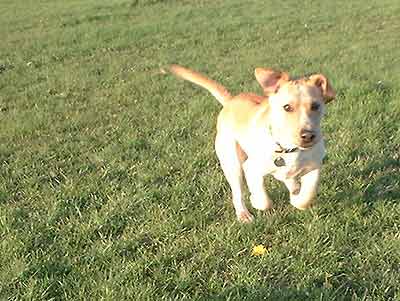 Oh two years on and still the pain is amazing and sharp. Right there behind my breast bone, lodged and unmoving. It’s more compartmentalized now. Grief of loss. Missing you. I’ve accepted that I will never see you again, but acceptance is a responsibility, not a panacea. I still want you back, I still imagine going back in time and changing just one thing. Any single thing would have made the difference and you would still be alive. I accept that I cannot change any of those things. I will always have gotten off the phone when I did, I will always have started the walk when I did, the walk would end at that precise moment. 5 seconds earlier and you would have made it safely across the street to see the man who was walking by. 10 seconds later and you would not have even seen the man at all and you would not have run like that.
15 seconds longer on the phone? A few extra minutes to walk an extra block? I don’t know. I cannot change it. I accept that everything moves ever forward.
Tonight, distracted by the pain of today, I cut my finger rather badly. David wrapped it for me. It’s wrapped in the leftover pink medical tape that we got to dress your ear after your surgery. How fitting that such an amazingly painful wound would be dressed in your bandages; that you are still somehow comforting me.
I often try to avoid comparing my relationship to you to that of a parent and a child, but if I’ve learned anything these past few months it’s to own your emotions. You were my heart, my grace, my redemption. You taught me patience and loyalty. From the moment I brought you home, all little and shivering, I wanted to spread wings around you and encompass you within me. I loved you fiercely and viscerally and and more deeply than anything else in my life. This pain I feel is equal to the depths of my love for you.
I miss you, I love you Ghengis